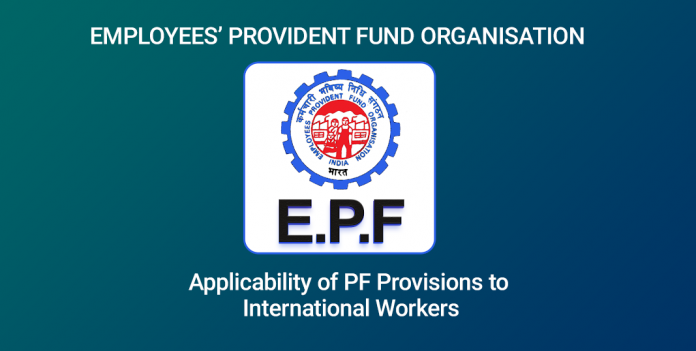 An introduction of international worker provisions in PF

Foreign nationals coming to take employment in India were earlier excluded from the provisions of the EPF Act as their remunerations in most cases far exceeded above the statutory threshold limit.

On the other hand, Indian workers venturing to work overseas are subjected to all contributions to the social security fund of the country where they work, irrespective of the time spent in another country. Often, the amount so contributed would stand forfeited, since, as the Indian Provident Fund, all social security schemes are subject to long-term rules of withdrawal, causing the Indian expatriate or his employer heavy losses.

In order to create level playing field and to pressure other countries to enter into SSAs with India, International Worker is introduced as a concept and they are bound to comply with PF provisions, regardless of their remuneration break-up.

Read more at: What is the EPF scheme and how to calculate PF balance?

An International worker may be an Indian citizen or a Foreign national.

1. Any Indian employee working or having worked abroad in a country with which India has entered into a Social Security Agreement (SSA); OR 1. Any foreigner who works in India in an establishment where the Employees‟ Provident Funds & Miscellaneous Provisions Act, 1952 is applicable.
A Social Security Agreement is a bilateral instrument to protect the social security interests of workers posted in another country. Being a reciprocal arrangement, it generally provides for equality of treatment and avoidance of double coverage.

Every International Worker, other than an ‘excluded employee’ should become members of the Fund. There is no minimum period of stay in India for activation of Provident Fund compliance. Every eligible international worker has to be registered from the first date of his employment in India. Click Here How to Register Your Business with PF Department

“detached worker” employed by a company in India but contributing to the social security program of the source country in terms of the mutual social security agreement signed between that country and India shall be an “excluded employee” under these provisions.

An international worker, being not an Indian employee, offering to the social security program of the source country in terms of the mutual social security agreement signed between that country and India and exempt from making any contribution to the Indian system for the period and terms, as set out in such an agreement, is a “detached worker” for the purpose of compliance under the Indian system.

An Indian employee sent on posting to a country with which India has an SSA becomes an “International Worker‟ and is required to contribute on full salary. He can, however, seek exemption from the social security legislation of the country in which he is posted on the basis of a detachment certificate issued in terms of the SSA. If an Indian employee is directly employed by a local employer abroad, such an employee shall be covered by the foreign country legislation.

All such establishments covered/coverable under the EPF & MP Act, 1952 including those exempted under section 17 of the Act) that employ any person falling under the category of ‘International Worker’ shall take cognizance of these provisions.

(a) PF for International Workers to be calculated on total wages instead of Basic and DA. Total wages means whatever the wages/salary receiving in India(includes Basic and all other allowances (HRA, Conveyance, Project Allowance) and the salary/wages receiving in his/her home country. Adding these amounts PF to be calculated on 12% as an employee contribution. The employee should disclose his hometown income to the Indian company for PF calculations

The contribution shall be calculated on the basis of monthly pay actually drawn during the whole month whether paid on a daily, weekly, fortnightly or monthly basis:

Whether foreign nationals employed in India and being paid in foreign currency are coverable?

Yes, International Workers drawing a salary in any currency and in any manner are to be covered.

Whether foreigners employed directly by an Indian establishment are coverable?

Foreigners employed directly by an Indian establishment would be coverable under the EPF and MP Act, 1952 as IWs and would not be eligible for the benefit of the detachment under an SSA.

W.e.f Sep 11, 2010, International Worker can withdraw his/her PF amounts based on the below conditions