On February 28th, the Supreme Court passed a judgment settling many pending disputes between Employers and the EPFO attempting to address the question as to what is Salary for the purposes of computing PF contribution. It held that the contracted salary is the basis for PF with the exception of House Rent Allowance (HRA). Any component which has variability for example Overtime Allowance, Production Incentive, Bonus, Attendance Incentive, Conveyance Allowance, Vehicle reimbursements, Telephone Reimbursements, etc which is determined on certain performance conditions or based on specific circumstances are excluded from PF computation. In the case of say Conveyance Allowance which is provided as a standard amount to all employees may then be considered as Salary for PF. Therefore, the inclusion or exclusion of which allowance or component of salary for PF will also need the application of mind as to whether it is the salary for PF or not based on the circumstances of each case.

Stipend – When PF applies & When PF does not!

How much of Employee Welfare?

This essence of this ruling is to safeguard the long term welfare interests especially of those lower wage level employees whose salary is below Rs 15,000/- a month and to protect their interests against employers attempting to introduce this Special Allowance head which in a sense is Mischievous Allowance to reduce the PF contribution of the Employer and thereby reduce its costs. However, with compensation these days being negotiated and widely accepted on a Cost to Company (CTC) basis the application of the ruling at the same CTC for these lower wage level workers (say with Basic Salary of Rs.10,000, HRA of Rs.4,000 plus Special Allowance of Rs.5,000; Total Gross Rs.19,000) may in fact actually be squeezed by almost about Rs 1,200 a month and now compelled to make long term PF savings which they may ill afford. Of course, the impact may vary amongst different worker segments. Those with families to support may now find that the little that they earned and took home to be further reduced consequently to this Supreme Court judgment. It becomes a moot question as to whether this ruling is truly a welfare measure in a CTC has driven HR market place. 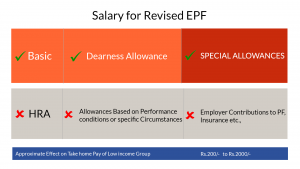 If Employers were to maintain the same Net take-home of these employees who hitherto had a lower PF due to the existence of a Special Allowance, the additional cost to the organization would now be Rs 1,200/- per month for a Salary of Rs19,000 per month, an increase of 7.23%. It might be possible to limit the impact by restricting the salary for PF computations to Rs.15,000 in case the Basic plus Special Allowance is more than Rs.15,000. See table below as an illustration with various scenarios of Basic Salary but with the same gross salary of Rs.19,000 pm. The shortfall of revised net take-home on previous net take-home could be anywhere between 1% to 11% depending on the composition of the basic salary and special allowance.

Request a Demo for Payroll Services

No Change for Higher Income Employees

For those employees whose basic salary is in excess of Rs 15,000/- there would be no obligation for Employers to make an additional PF contribution even if they had a Special Allowance. However, they may either eliminate the Special/Mischievous Allowance in their pay structure and roll it up into Basic Salary or even choose to continue with the Special Allowance and exclude the same. However, this could lead to additional cost on gratuity, leave encashment and other retirement benefits as they will be computed on the basic salary. Hence, the pay structure may be retained as it is but the salary for PF computations may require to be modified to include Basic + Special Allowance. The considerations would be the collective choice of these groups of Employees with the HR and management of the company.

Does this ruling have retroactive applicability?

As is evident in this judgment there has been much litigation between Employers and the EPFO in various courts and levels of the courts on this question with some variations in the facts of each case on Special Allowance and how this is determined from one case to another. The Supreme Court ruling is dated February 28th, 2019. The question then arises as to what happens to all the past contributions where Special Allowance as part of the pay structure for employees earning below Rs 15,000/- per month and lower contributions were made. Do Employers now have to re-compute and cough up additional contributions to the PF Department? If so to what particular backdate. What happens as regards those employees who have already left their services? Also what happens to the additional PF contribution of the Employees share, would they have to recover it from them? What if the old employees do not have UAN, which is now mandatory to submit the returns? Will, there be any interest and penalties for delay in payment of these dues and PF department coerce the companies to recover these dues by issuing prosecution notices to the companies and its Directors? These questions remain consequent to the ruling and the PF Department would do well to issue a notification to address these open questions.

Read More, PF deductions to include special allowances along with basic salary

It is being perceived that margins of the companies, particularly MSMEs, are getting eroded due to market forces in the recent past. It this time, if an amendment of PF rules leads to additional burden on both employer and employees in general, it could hit the industry heavily, which is already reeling under heavy burden due to demonetization, GST, rigors of continuous tweaking compliance requirements relating to Companies Act, etc. This could again lead to more unemployment, which is already under stress, and could affect the very purpose of improving employee welfare in general, which is being intended to bypassing this judgment. The Government should devise some scheme to absorb the additional cost by way of subsidy, at least for MSME companies.

Central Government is proactively taking many measures towards ease of doing business in India. It is also recommended that the effective date of implementation should be made prospective to limit the challenges to address the many issues that could crop-up now due to this judgment. Otherwise, implementation of the scheme itself will become untenable for the industry.